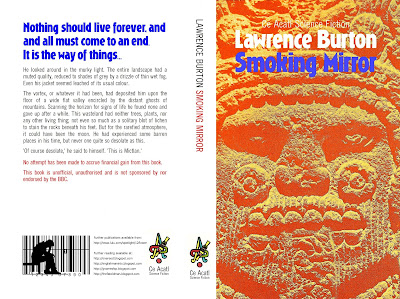 This one has been around since 2010, but I suppose there's still a slight chance that of the five people who now follow this blog , two of you might not have heard of it. About a million years ago, before I learned how to write, I attempted a Doctor Who novel because I figured it would be fun, a piece of piss, and likely to get published given the quality of Warmonger, Deadly Reunion, Earthworld, and others. I was wrong on at least two of those counts, and I eventually chucked the thing out under my own steam thanks to the magic of Lulu Publishing, mainly because it had taken me a long time to write and it would have felt wrong to just leave it as it was. You may recall it from this post.

Anyway, I've just had some fresh feedback from the excellent Stan Batcow of Pumf Propane & Propane Accessories because I bunged him a copy in exchange for a couple of CDs, and that seemed like as good a reason as any for a new post here, not exactly a review, but here's what he wrote:

You did indeed make Pumf references in Smoking Mirror - I was also incredibly flattered that the Doctor wanted a copy of Howl's Grand Theft Audio CD, but that he couldn't remember whether Howl had been big in the 1990s or 2090s. Hopefully you'll have been prophetic, and - although I'll be long gone - Howl will finally change all world attitudes for the better in the 2090s. And the citizens of that future time can all then spend Sednan five centime pieces, featuring relief images of the Exalted Howling Batcow on both sides. Last I heard, the centime in the 2090s was worth the same as approximately sixteen thousand GBP sterling today. It was quite strange to read about myself being somehow part of a fictional world, and a most enjoyable experience. Thanks very much for putting me in there!

Apparently I mentioned Stan in the book a couple of times. I'd forgotten all about that. Never mind.

I wouldn't ordinarily point out typos in a book that's already been published, but I know you said you'd re-uploaded files to Lulu a while back for Kiss of Life, so I'll point out that on the back cover of Smoking Mirror, the first paragraph (large font, blue text) has the word and at the end of the first line and the beginning of the second (so it reads Nothing should live forever, and and all must come to an end.) I've seen the exact same thing presented as an optical illusion-type puzzle - the brain is tricked into thinking there's only one and by the action of flicking the eyes to the next line, and thereby momentarily losing concentration. If it's something you can quickly fix and upload for future copies, I'm sure you'd want to. If not, I humbly apologise for having brought to your attention something that will monumentally piss you off forever.

I have no idea how this could have eluded me for the past seven years. Anyway, I've made the correction so copies ordered from hereon will be new and improved at least in this respect. The and and version of the cover can be seen above. Anyway...

I enjoyed Smoking Mirror very much, incidentally. It took me quite a while to get into it, but once I'd assimilated myself into a Doctor Who world I managed to join in with the action quite naturally. Loved the regression of the TARDIS into a prehistoric state, as well as the joint timeline segments printed in two columns side-by-side. I wondered how hard it had been to get the number of words to be close enough to equal in both columns so the layout was correct. (The first occurrence of that device made me think that it was a layout mistake, as the two columns were so close in their wordage). I can safely say that it was far better than many, many other books I've read over the years and makes me wonder, yet again, why you aren't a millionaire. As a first novel it should have had the publishers rubbing their hands together in glee, and banking on earning their retirement fund off your Doctor Who thirteen-novel boxset by 2027. But, as we know, people are far too fucking stupid for that.

So there you go. It's unofficial, and it's fanfic, and I haven't even opened it since proofreading the very first Lulu version (except for the back cover, apparently) because I'm scared it might be rubbish; but it's cheap because I'm making nought from the sales (so as to pre-empt accusations that I am), and some people seem to think it's all right, and Christmas is coming up, 'n' shit, in case you know someone who likes Who and isn't too fussy...

Availabubble yonder.
Posted by Lawrence Burton at 21:54 No comments: