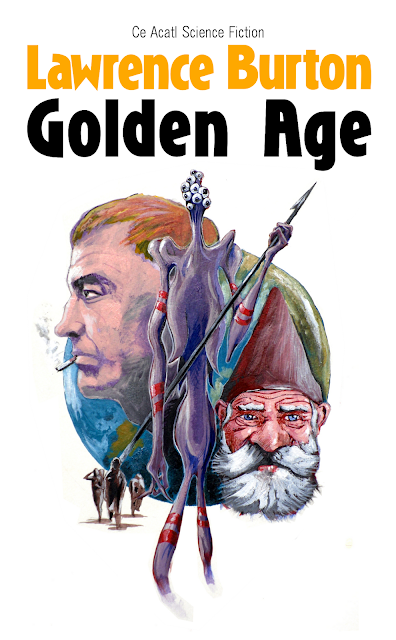 Here's my new novel, either my third or fourth depending on how you're counting, and what feels like the first proper one - the first to have turned out how I hoped it would turn out. It was written parallel to Against Nature back in 2012 or thereabouts and represents a response to the same, amongst other things. It isn't a sequel, or a tie-in (yuck), or anything of that sort, although it explains the two strangers mentioned in passing on page forty of Against Nature if anyone really cares about that kind of thing.

For reasons I won't go into here, Against Nature had a problematic history dribbling on for five or six years prior to publication, and by the time Obverse Books turned up to save the day, there was an element of my wanting to get it written at least so that the previous five or six years hadn't been a complete waste of time - whilst hopefully yielding something worth reading in the process. However, due to it having become work in the sense that building a cabinet is work, I needed something a little sparkier to get me through.

I therefore committed myself to a writing exercise, eight-hundred words a day, hammered out without too much aforethought as a mean of warming up to unpicking and embellishing the labyrinthine plot of Against Nature. The exercise was based on one of A.E. van Vogt's techniques, specifically his preference for narrative blocks wherein he introduced some new or unexpected element every eight-hundred words, developing a thoroughly disorientating rhythm and yielding stories which genuinely defy expectation. So, the parameters I set for myself were as follows:

By the fourth or fifth day, the story had begun to write itself, and it felt like something which might eventually grow up to be a novel. Clifford Simak once said something along the lines of how, when writing a novel, he usually has about a third of it worked out but the rest he leaves to his characters to develop of their own volition. This always struck me as a somehow more honest means of writing than the story arc and post-it note bullshit by which Against Nature was eventually plotted, and so Golden Age became a reaction against the narrative rigidity of its predecessor and contemporary; and the more I wrote, the more it became a reaction against everything I'd come to loathe about the milieu from which it was born and a celebration of the science-fiction novel as a medium in an historical context. I had fun writing it, and I personally think it worked out well.

Golden Age - the title of which loosely refers to the aforementioned narrative technique by which it was written - sat on my PC for the next six or seven years, at which point it seemed like time to get the thing sorted out. I spent most of 2020 editing, turning sentences into grammar, going over it again and again, and having all of the Raumclown's dialogue professionally translated into German - which wasn't cheap, and which I mention lest anyone should have formed the impression of Golden Age being just some random splatter of an idea which seemed funny at the time; and now, at last, you are able to purchase copies for yourselves, you lucky, lucky people.

So here it is: no pitch, no plot outline, no writers' workshop, no focus group, no agent, no career projection, no eBook, no Amazon, no Patreon, no market research, no merchandise, no funny foreign names you can't understand*, just your proper blue collar science-fiction brought to you as nature intended. No previous experience necessary, although admittedly it's littered with references to earlier short stories, some of which appeared in The Great Divide.

Buy as many copies as your bank account can manage here.

Review copies available on request depending on what sort of show you're running and whether or not I approve.

Posted by Lawrence Burton at 20:30 No comments: