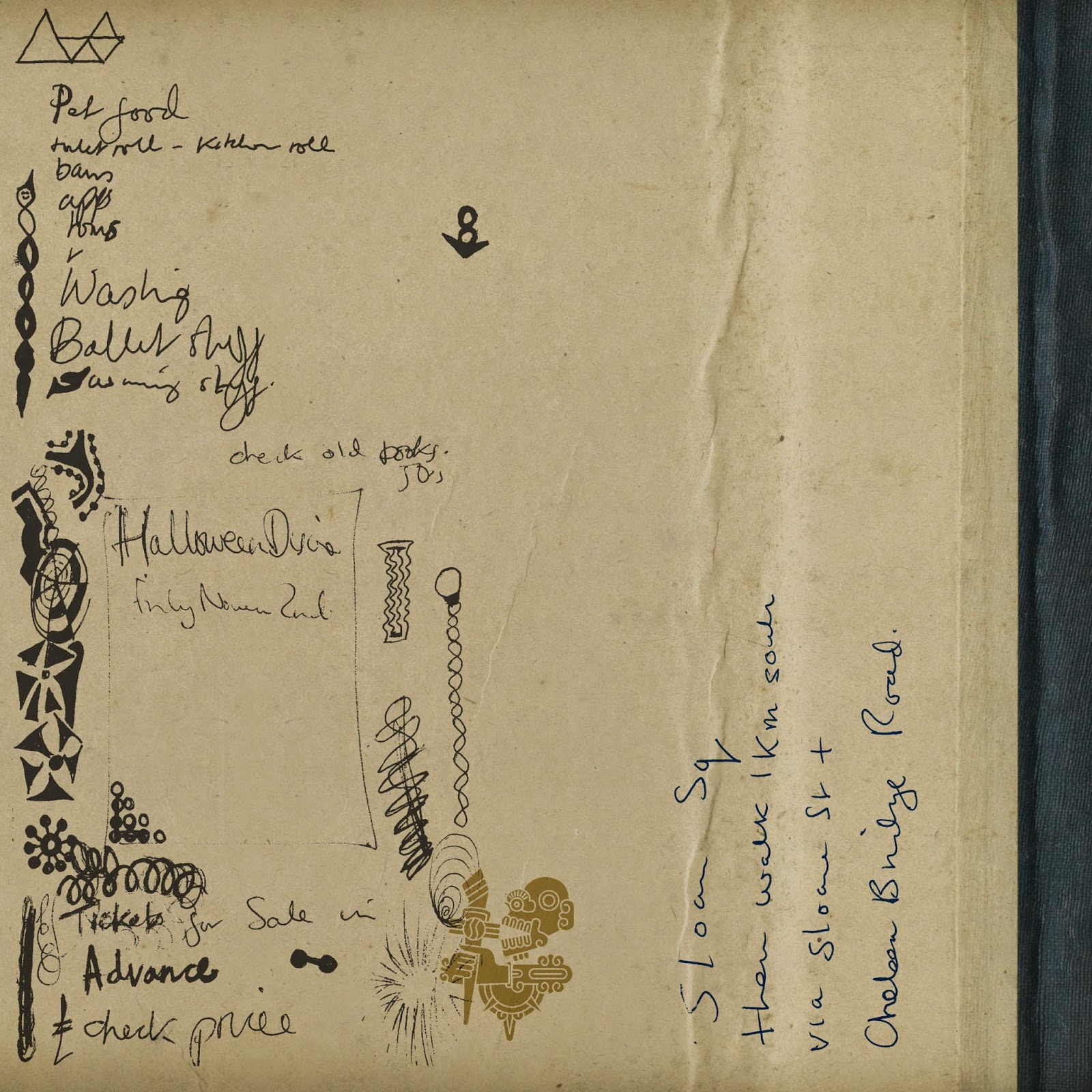 Hand. Cannot. Erase. as some of you may be aware is an album by Steven Wilson of Porcupine Tree, Bass Communion, and related endeavors. My friend Carl Glover of Aleph Studio has been responsible for the design of a fair quota of Steven Wilson releases over the years, and asked me to chip in with this one. Specifically he asked me in my capacity as someone familiar with Mexican codices who might be able to come up with hieroglyphs corresponding to four phrases, one of these being the album title itself. The design of the album and its accompanying material were, as I understood it, then a work-in-progress, so although Carl wasn't sure how my hieroglyphs were to be used, or if they were to be used, it seemed like a good idea to have the material on hand. I'm not particularly familiar with Steven Wilson's music, aside from some of the Bass Communion stuff from a while back, but I met him a couple of times around Carl's place and he seemed like a decent guy, and this sounded like it would be a fun thing to do. I translated the four phrases into hieroglyphic form to the best of my abilities, and then faked a pseudo-anthropological essay to explain why the images weren't just some incomprehensible shit I'd thrown together, and in case it was of any use in terms of the finished creation.

In the end only one of the hieroglyphs proved useful, converted to monochrome as something resembling a clay-stamp and appearing amongst the material accompanying a limited edition deluxe version of the album, a limited edition which apparently sold out prior to release. I'm reproducing my original material here for anyone who may be interested, fans of Porcupine Tree or whoever, because it was fun to do, and quite gratifying to see it used, even as just a weird little detail. 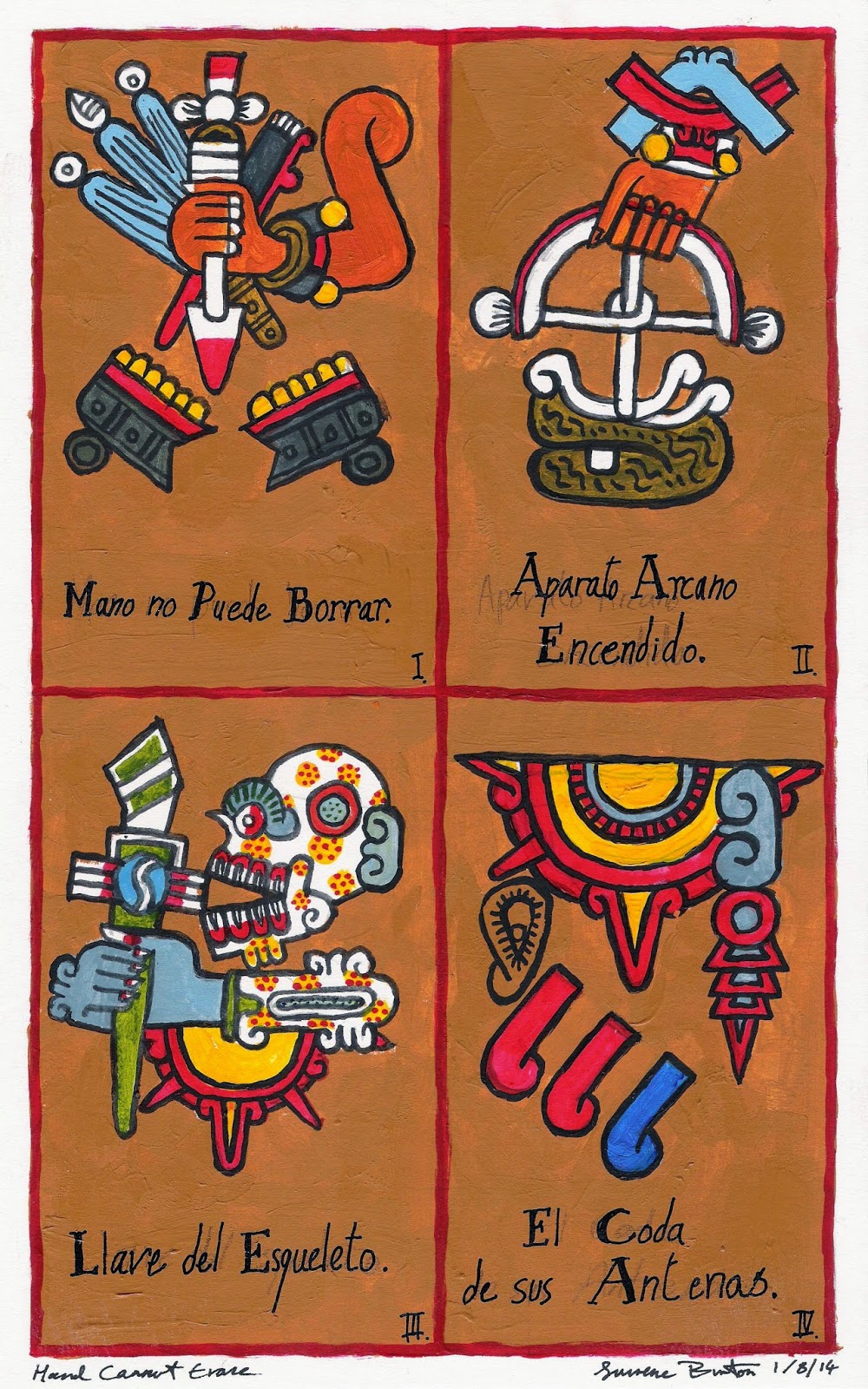 The San Antonio Fragment comprises a single page of bark paper divided into four numbered images painted in the Mixteca-Puebla style most closely associated with Codex Borgia and others of its group, each accompanied by a written gloss purporting to provide the hieroglyphic images with a Spanish translation, although the meaning of these translations remain ambiguous, as does the precise correlation of image to gloss. The numbered images are as follows:

I. - Mano no Puede Borrar (Hand Cannot Erase)
There has been some degree of debate as to whether the gloss of the San Antonio Fragment was a significantly late addition to the page, perhaps as an effort to interpret the symbols based on something besides the testimony of the original artist (Tedlock, 1974), although most feel it likely that the first of the set rules out this probability, the gloss being too specific (and one might suggest idiosyncratic) an interpretation to have resulted from an approximation of the kind which is difficult to avoid in the interpretation of Mixteca-Puebla symbology. The reason for this given by Manolo (1982) is simply that the gloss offers hand rather than arm, which might appear the more obvious interpretation, even given that the full arm specifically denotes an action. In this instance the action is the destruction or erasure of some object. The familiar water glyph to the left of the image would appear to serve a phonetic purpose with the stem of a-tl (water) creating a phoneme for the negative prefix a- thus stating that the hand here cannot erase.

II. - Aparato Arcano Encendido (Arcane Handset On)
In this image the action is denoted by the ollin glyph representing red and blue intertwined strands of rubber in turn denoting implicit force, and specifically the implicit force of a bow driven fire drill, the action of which is made clear by both the presence of an operating hand and volutes of smoke. The consensus translation here gives this as representing an object to which one would refer as a handset, although the precise function of that object is possibly not significant. Beneath the volutes of smoke, the distinctive wrinkled lower jaw of an old man seems to serve an adjectival purpose in denoting arcane.

III. - Llave del Esqueleto (Key of Skeleton)
Here a staff of office of striking similarity to that born by the wind God Ehecatl in Codex Borgia (plate 56) is born by a skeletal figure, probably serving to indicate a generic type rather than any specific figure through the abbreviated form of a skull and forearm. The inverted half solar disc appearing as the bottom half of the image perhaps serves to underscore the figure as a generic representative of the dead rather than any more familiar denizen of the rheological underworld. The staff of office would of course serve as a key in so much as it would allow the bearer access to official spaces forbidden to commoners, royal courts and guild offices for example.

IV. - El Coda de sus Antenas (Her Antennas Coda)
Of the four images, this one has presented the greatest challenge for interpreters seeking to connect symbolic language with gloss. The main part of the image would appear to be a solar disc, or at least a celestial object endowed with a listening ear. Gainsborough (1968) disputes that this could really be analogous to antenna, a word which would hardly have held much currency in the late 1600s, but in the absence of any more legitimate grounds for doubt, we must for the present work with that which we are given. The three volutes of speech or song appear to denote a coda or something which qualifies as a closing piece in so much as the third volute is differentiated from the others. The symbology here would simply represent some dualistic concept were only two volutes shown. Finally the curved oyoualli symbol representing female genitalia on the left is interpreted by the translator as a possessive suffix - her antennas. That the oyoualli was apparently left unpainted and incomplete is interpreted by Gainsborough (1968) as indicating that the author may have had a struggle illustrating the concept he had been given. Although this would perhaps account for the somewhat convoluted symbology employed here, it may simply be the case of an artist reluctant to depict that which would incur the wrath of his more prudish Franciscan sponsors.

So there you have it. Anyone requiring a larger, probably downloadable version of the above image should, in theory, be able to find it here. Anyone seeking the Steven Wilson album should hopefully be able to work that one out for themselves given that its been tickling the upper reaches of the album charts in a few countries. 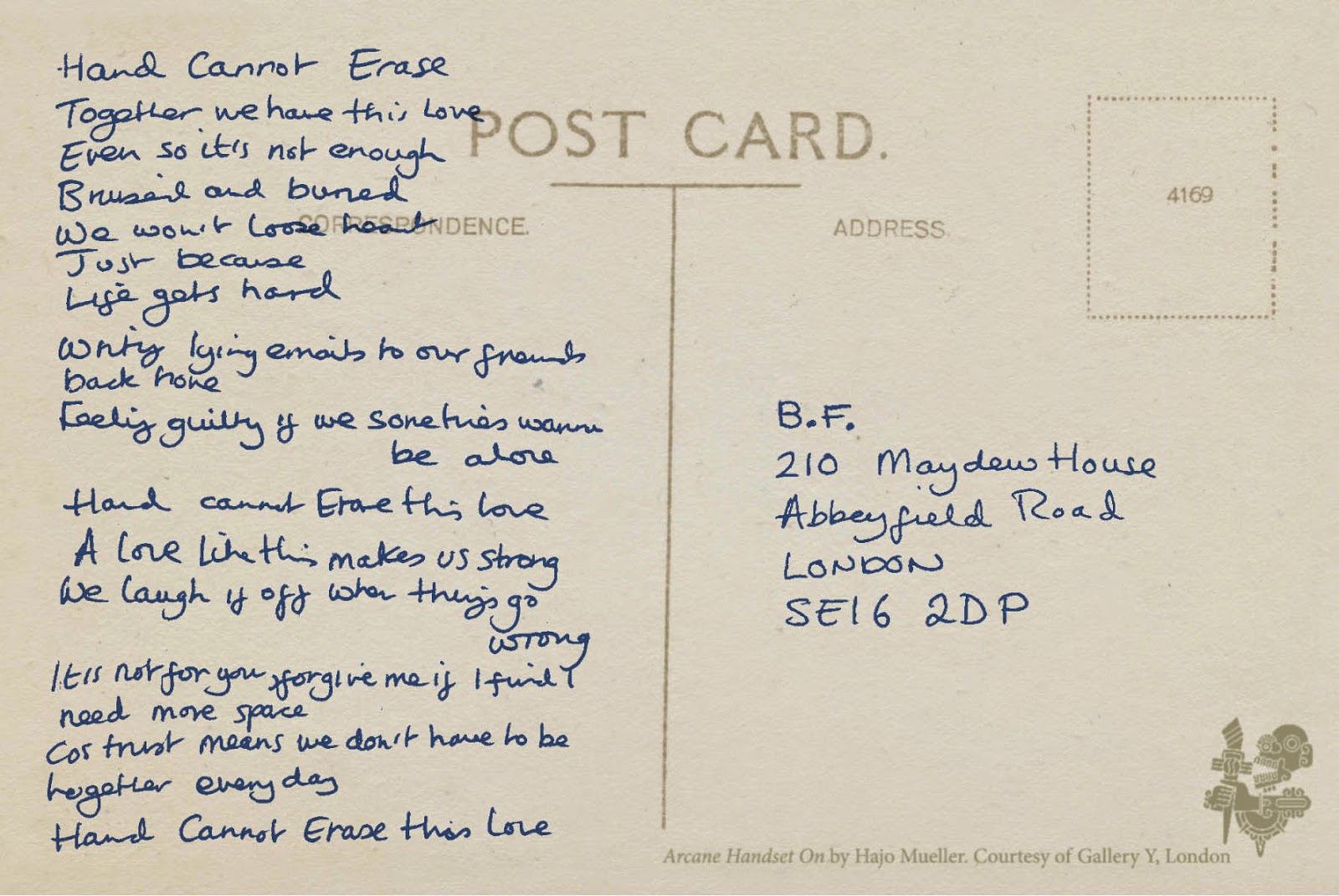 Posted by Lawrence Burton at 15:47 No comments: 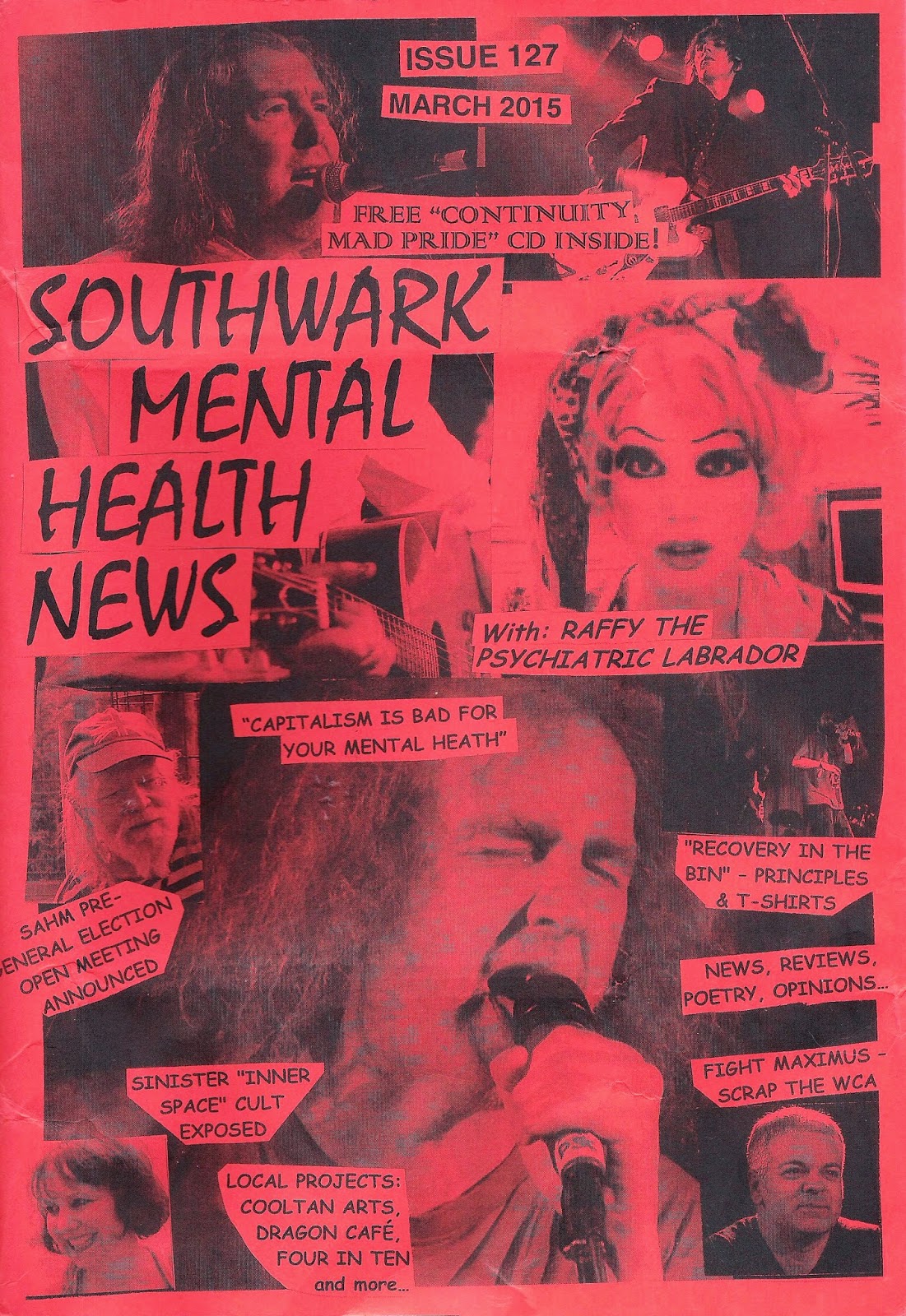 There's another installment of my Raffy the Psychiatric Labrador strip in the new issue of Southwark Mental Health News, this time a two page job with multiple panels taking more than two seconds to read. The magazine comes highly recommended as, I suppose, one of the last surviving things you could probably truly call a fanzine, assuming you don't count e-zines, which I don't - reviews of stuff you probably won't have heard of, intelligent articles - notably a good one on mental illness as an inevitable byproduct of capitalism - and plenty of hints as to all the stuff that's wrong with western society, just in case you hadn't already worked it out, as a lot of people apparently haven't. Additionally this one comes with Continuity Mad Pride, a free CD of mostly exclusive stuff by Alternative TV, Ceramic Hobs, UNIT, Mex, the Astronauts and others - and it's a proper CD with a case and a cover and everything too, not some hokey CDR shit. I've been listening to it today and it's pretty good.

As to getting hold of one, there are some copies left which will be sent free to people in the UK if they get a postal address to whoever answers when you phone 020 7358 7279 before Sunday the 15th March, or email your address to samhfunding@gmail.com - I believe this gets you on the mailing list for the next ish, even if you're too late for this one.

I have a couple of spare (and free) copies if anyone here in the US wants one, in the event of which, reply to this post with your email address and I will be in touch.
Posted by Lawrence Burton at 03:30 No comments: