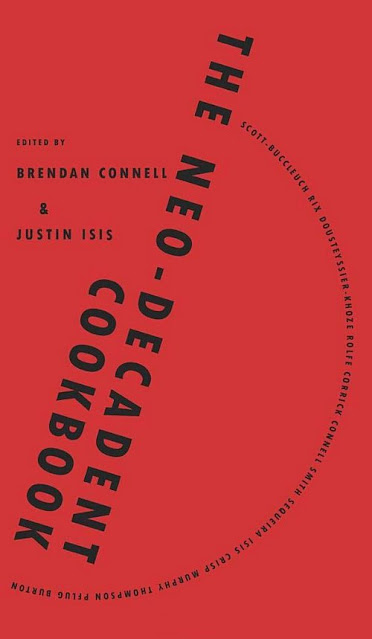 I have a short story in this collection, The Neo-Decadent Cookbook which - get this - isn't really a cook book! Crazy huh? It's a reet classy looking hardback and has nothing to do with Doctor fucking Who, if you can imagine that. I haven't read it, having only just received a copy, but Justin Isis, Colby Smith and Ursual Pflug all know their way around a sentence so I'm sure it's wonderful. It seems to be available from everyone, everywhere, from what I gather (which makes for a nice change) so please feel free to look it up by means of your preferred search engine. It seems to cost about twenty bucks.

Posted by Lawrence Burton at 18:37 No comments: 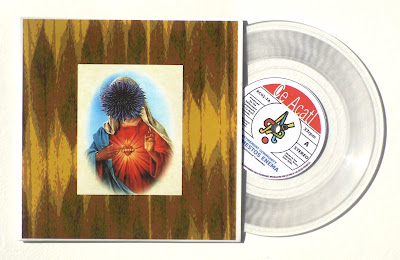 Retirement Community is my new group. You may remember me from when I played the triangle with Konstruktivists or Academy 23 way back in the depths of time, if that helps, but this is something new. Our first single is now available as download or lavish 7" lathe cut clear vinyl single in a limited edition of just twenty copies, Domestos Enema on one side, Living My Best Life on the other - sure to be a collector's item, eventually.

Please consider buying a copy of our single.

Purchase can be effected by clicking on this Bandcamp link.

If you don't want to click on the link, then this is what the b-side sounds like:

Thank you for reading.

We are Retirement Community and we approve this message.

Posted by Lawrence Burton at 19:35 No comments: 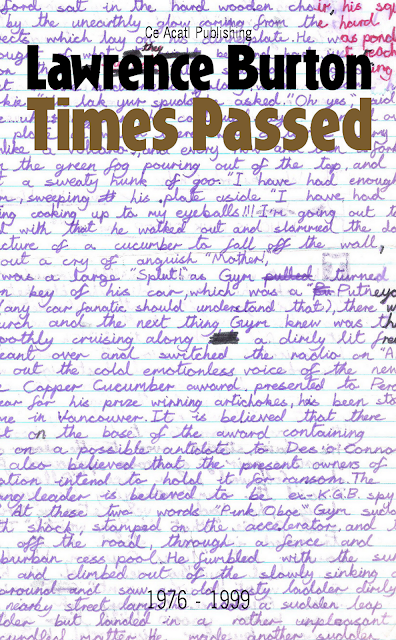 I have new stuff available, specifically old stuff collected in two fat volumes of such girth that the final proofreading run took about three weeks. Times Passed collects more or less everything I've ever written which seemed worth preserving by some definition and was as such compiled purely for the sake of vanity, specifically so I have this stuff on my bookshelf and don't need to go scrabbling for crumbling fanzines in the back of cupboards. I'll therefore refrain from making any claims as to how entertaining anyone else is likely to find this material, not least because there's a fair bit which makes me wince - nevertheless included because the theme was everything rather than just the flattering stuff.

I say everything, but it's actually just the readable material, things which make some sort of sense as a piece of writing if not necessarily a great piece of writing - no feeble attempts at poetry, nor anything written at school concerning what I thought Chaucer was trying to say, and - so far as I recall - only one essay which I never quite finished. So, without my actually bothering to check the index, what you get for your two-million pounds outlay are stories, plays and vignettes written for the school English class, self-mythologising teenage fanzines, art degree essays, letters to music papers, reviews and articles from Music from the Empty Quarter, The Sound Projector and others, essays from one version of SMILE, interviews, and things written for my own amusement which were never used for anything. I'm pretty sure almost everything I've ever had published is here, thus saving anyone having to shell out fifty quid on eBay for some fanzine I had printed back in the nineties (which I have actually seen, weirdly enough). Subjects covered include weirdy music, Mexico, mythology, Futurism, Faction Paradox, my life as an edgelord, and all of the usual obsessions.

I trust anyone who has made it so far as this sentence to have formed some idea as to whether this breeze block is likely to be of any interest to them. Anyone not yet deterred by the prospect of so shamelessly indulgent (and - let's not deny it - expensive) a collection can buy the first volume here and the second one here.

One at a time now, people. I'm sure there'll be enough for everyone. 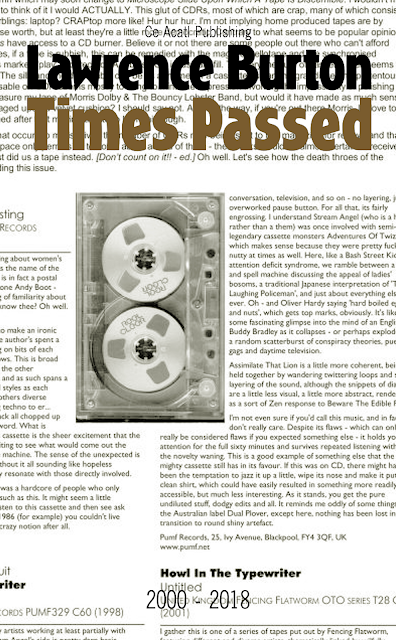 Posted by Lawrence Burton at 19:48 No comments:

Someone Actually Read My Novel... 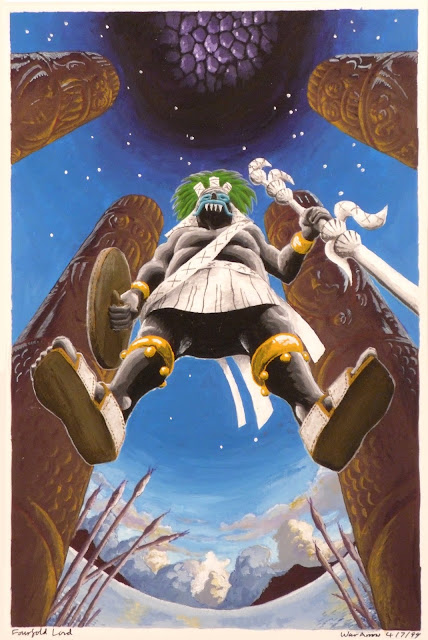 I'm not sure why I failed to link this back in 2019, but here's an extensive analysis of the book what I wrote, Against Nature, many, many copies of which are doubtless still available from no good book retailers. Tibère gives me a lot more credit than is my due with the parallels he finds, many of which are simply parallels with aspects of Mesoamerican culture which I reiterated, not necessarily with quite such deliberate intent regarding the symbolism; but his observations are absolutely on point, and enough so that I wish a few more had been deliberate - particularly with reference to Rabelais. Additionally, it's massively satisfying to see that someone picked up on a few of the details relating to Plato, Huysmans and the like.

Against Nature was a real labour of love and took a long time to write for one reason and another, and I was literally living in a different country by the time I finished it. I wanted to write something which would affect the reader in the same way that This Town Will Never Let Us Go had affected me, and which had enough philosophical depth to keep anyone busy for a couple of months, should they be of ponderous inclination. Its reception was therefore a bit underwhelming from my perspective - those who expressed a view mostly liked it, one or two really liked it, and a few didn't seem to appreciate my having filled it up with all those words 'n' shit. Weirdly, and against my expectation, I found the criticism didn't bother me as I thought it would. Mostly it seemed like those who regarded Against Nature as incomprehensible had wanted an entirely different book, one of a kind I've never wanted to write; but it still seemed a shame, like when you take time to cook something for the boy and it turns out that all he really wanted was a burger. It would, after all, be a boring world if we all liked the same thing.

Anyway, I hadn't thought about Against Nature or Faction Paradox for a while. It's old news and I've found the increased desire within sections of the potential readership to fit everything neatly onto the same bookshelf as the outer space robot people of television's Dr. Who kind of depressing. I don't resent the association, except where the Faction is understood as only that and not much else. I'd like to think I spent nearly eight years - or whatever it was - writing something with qualities besides how well it squares with something on the telly. Anyway, that Tibère took the time to think this hard about what I'd written, is gratifying, even humbling, and actually makes it all worth the while.

Still available here if anyone wants one.
Posted by Lawrence Burton at 21:37 No comments:

Email ThisBlogThis!Share to TwitterShare to FacebookShare to Pinterest
Labels: Against Nature 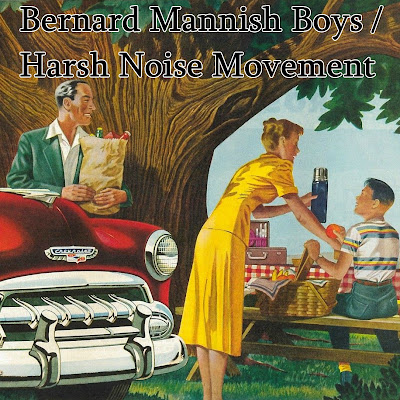 Anyone who follows my music reviews posted on Bricklaying the Charleston possibly will have noticed the name of Harsh Noise Movement cropping up on a couple of recent occasions. Harsh Noise Movement is both a label and a musician, and possibly one of the strangest, most genre-defying, and certainly the most prurient I've encountered, which is saying something.

The most recent HNM release I've had the pleasure of receiving is a cassette copy of a split album with one side by Dr. Heathen Scum of the Mentors, the other by Harsh Noise Movement. I was quite surprised at the musicality of the material by Dr. Heathen Scum - outrageously offensive lyrics set to traditional pounding heavy rock. It reminded me of something I'd tried to record with Andy Martin back in the days of UNIT. We had this discussion which somehow ended with the conclusion that the thing we had most enjoyed about heavy rock before it went all emo and admitted it also listened to Wire and Joy Division was the sexism, by which point we were laughing so much that our stomachs hurt. You probably had to be there. That week I set to work on a few tracks and wrote some lyrics. Andy played lead guitar and sang on one of them, and then we just kind of ran out of steam; which personally I blame on Andy's nagging mother in law being up on the blocks that week, leaving the remaining three instrumentals as damning metaphors to men as a species finding our voices unfairly silenced by all those man-hating period ladies and being all for women's rights but feminism has gone too far etc. etc.

I once played these tracks to Stan Batcow, and I think his comment was very funny, then shame on you, or something of the sort, and with Andy and myself having moved on to other things, that seemed to be the end of that; until I mentioned these tracks to HNM's CEO and he suggested releasing them as part of a split; and so here they are at last, presented in unholy union with a fat slab of Harsh Noise Movement at their most violent and confusing, and free if you're too tight to feel like paying.

Download it here, and please accept my apologies in advance. Stan was right about us.
Posted by Lawrence Burton at 16:10 No comments: 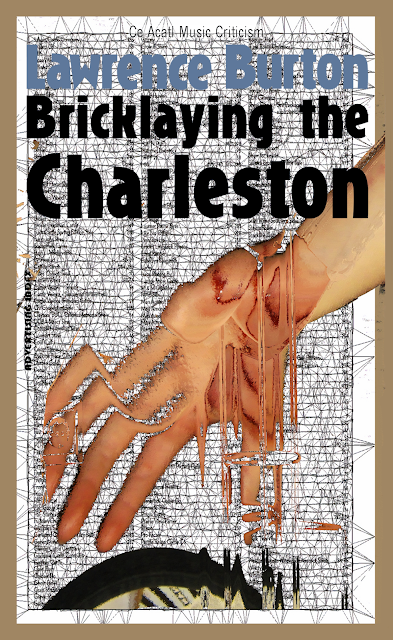 If you're presently barricaded in with five billion rolls of bog paper, no plans to go anywhere for the next couple of weeks, and you've already binged all the Jersey Shore and Wheel of Fortune you have stored on your magic telly recorder, then why not treat yourself to a big fat paperback of music reviews previously posted on this blog, but now smartened up and collected in a form more closely resembling a traditional holy book, complete with individual pages? There are probably several good reasons why not, not least being that you could read the fuckers for free online if you cared that much, but you should buy the book anyway. It contains jokes, light-hearted remarks and observations in the vein of Richard Stilgoe, some judicious sneering, and five years worth of highly subjective opinion on musical artists ranging from Nurse With Wound to the Goodies, and it will keep you busy for fucking yonks, particularly if you're spending that time sat on the bog; or you can use your big fat copy of Bricklaying the Charleston to brain any criminals who happen to break in, hoping to make off with your beloved toilet rolls.

Self-deprecating gags aside, a lot of work has gone into this one, and I genuinely believe it to be a cracking read, albeit of the kind which you dip into rather than pore over for hour after hour; and such is my confidence that I shelled out to commission one of Paul Walsh's powerful digital artworks for the cover.

Buy it here. Ideal gift for the black sheep of the family etc. etc.

Anyone able to review this book, please get in touch and I'll sling you a freebie, providing wherever the review appears is an enterprise of which I approve - so probably nothing with either fan, cult or industrial in the title, sorry. I have standards to maintain. Should it need stating, review copies are not sent out in expectation of a good review, only of a review which is more than just one sentence and a link.
Posted by Lawrence Burton at 22:50 1 comment: